Since the first track day at Donington Park last month, we’ve seen plenty of areas for improvement for the Golf GTI. The first of which is power. With the stock IS20 turbo running out of steam on the long straights at Donington, it was apparent that a punchier turbo was going to be needed to fulfil the demands of experienced racing driver, Rob Baker, who is also the owner of Area Motorsport. 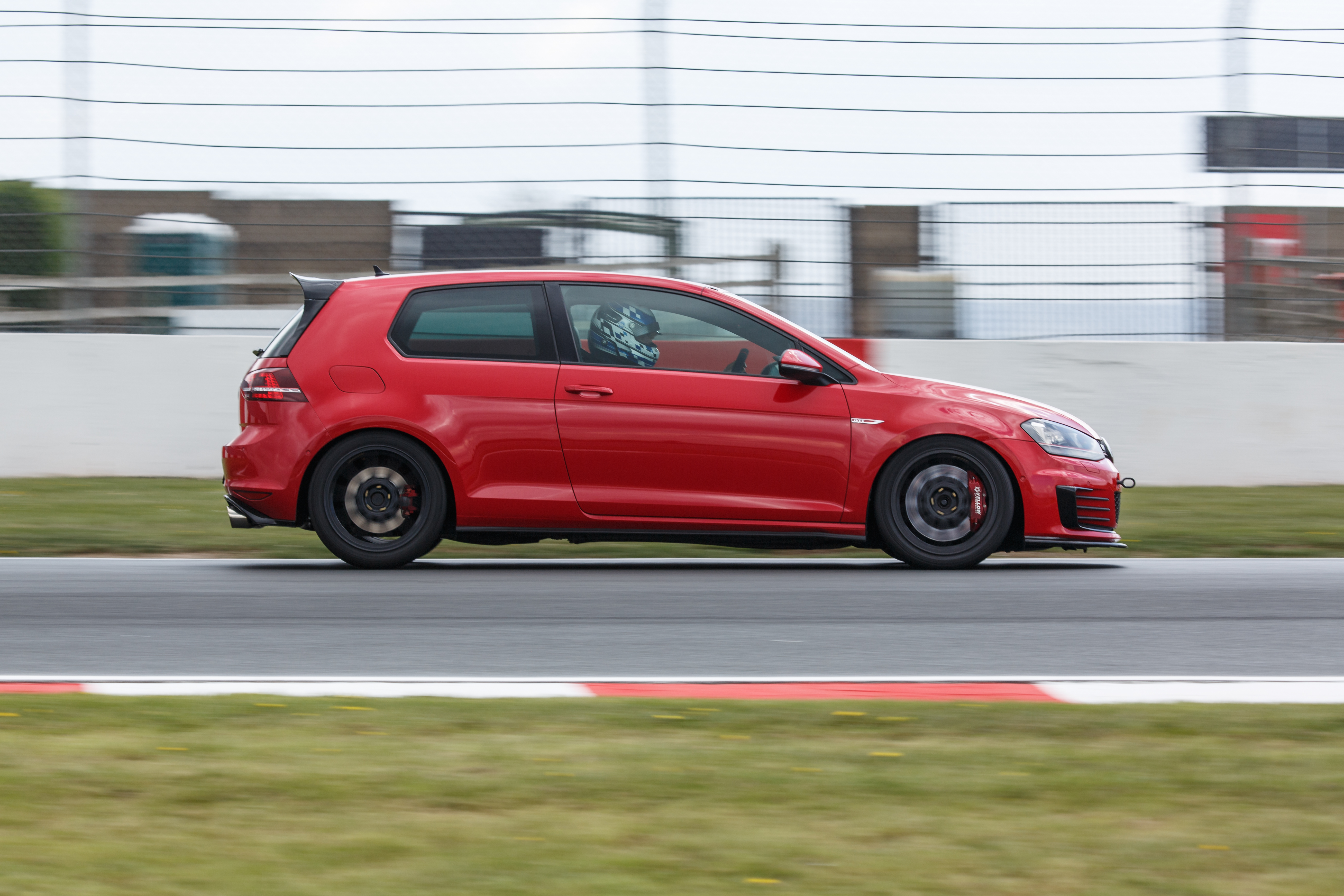 This is where HPA Motorsports stepped in. They’ve joined forces with us in this build to help us transform the Golf into a fully fledged track day warrior! HPA Motorsports have been researching, testing and engineering tuning parts for over 30 years for VAG cars. During this time, they’ve competed and had a success in various championships and races, demonstrating the quality and performance of their products. 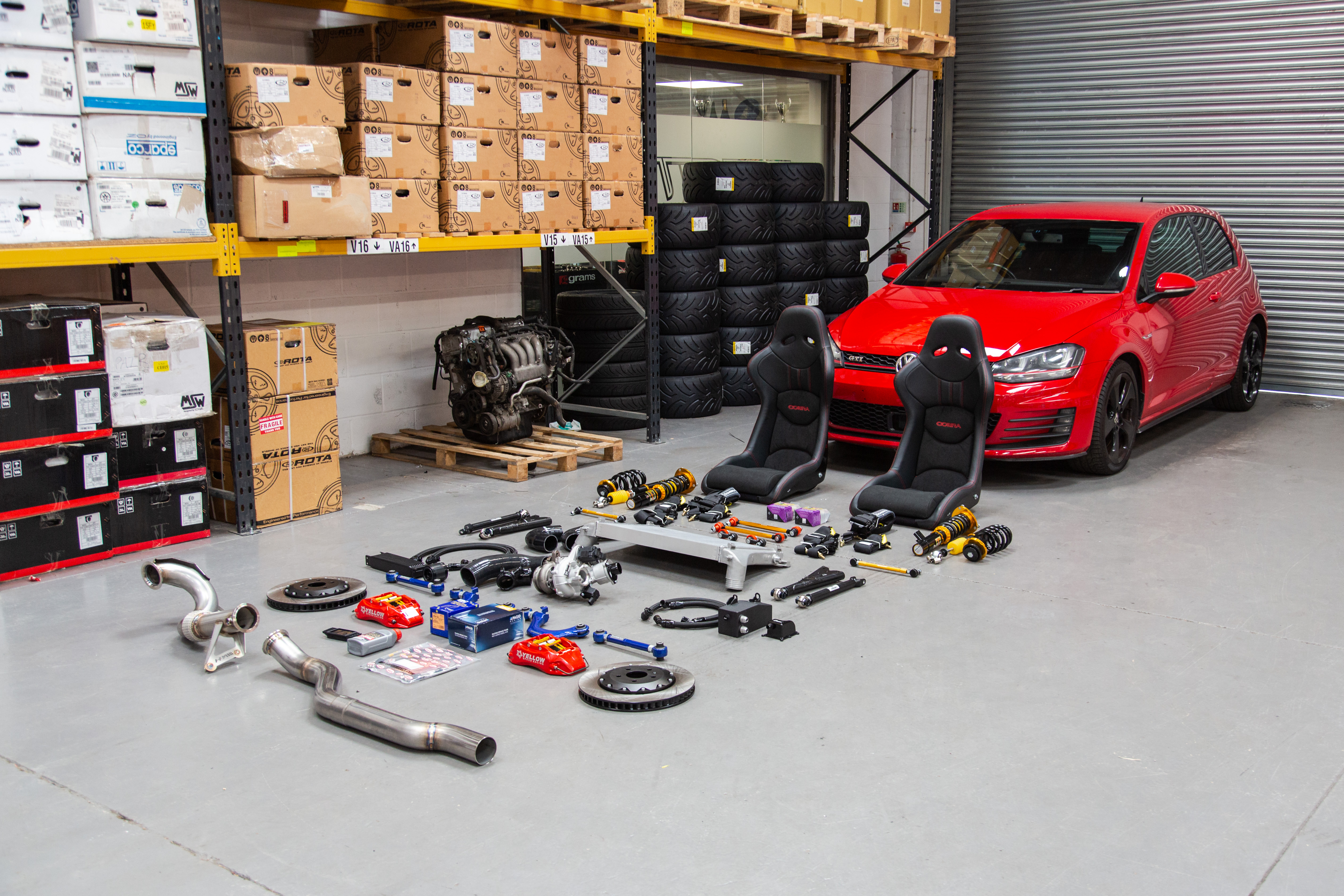 HPA supplied us with a myriad of parts from their range to help us go faster, the first of which is their OEM+ IS38 hybrid turbo upgrade kit. This turbo features an upgraded and redesigned bearing system that has been proven out on the road up to 420hp. Each turbo benefits from precision CNC machining of the exhaust and intake housings and include a HPA proprietary mixed-flow turbine wheel and CNC machined billet compressor wheel which provides better spool and anti-surge characteristics. What’s great is that HPA promise OEM+ quality, which is vital for us as the car is used hard on track and the stock IS20 turbo has already suffered from a crack!

Jonny, Area Motorsport technician, got to work stripping the car down ready to remove the IS20 turbo. First things first are to remove the subframe to allow access to the rear of the engine from underneath.

It was then off with the old down pipe which is bolted to the old turbo. 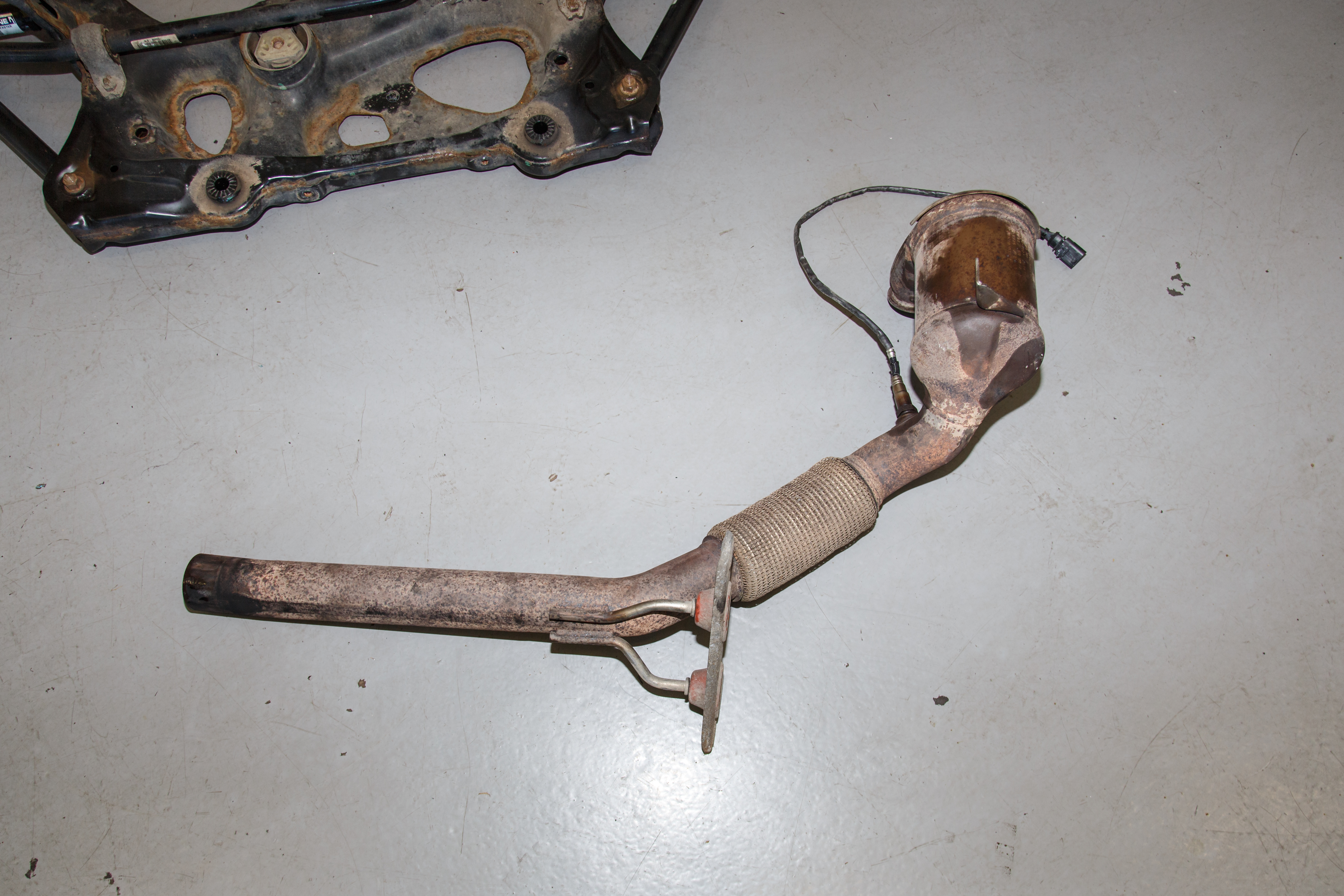 Finally, the driver’s side driveshaft was removed to allow more access to remove the required components. With the old turbo removed, Jonny could then check that everything was ready to go with the new HPA Motorsports unit.

The new hybrid IS38 was then bolted into place at the back of the engine and fixed securely, making sure everything was tightened up correctly ready for some increased boost!

To maximize performance, HPA Motorsports also kindly supplied their exhaust down pipe to us that mates up to their turbo. The OEM 63mm downpipe has a restrictive catalytic converter as well as a varying array of angles which don’t allow for ideal flow and result in higher back pressure at the turbo, forcing it to work harder whilst generating excessive heat. 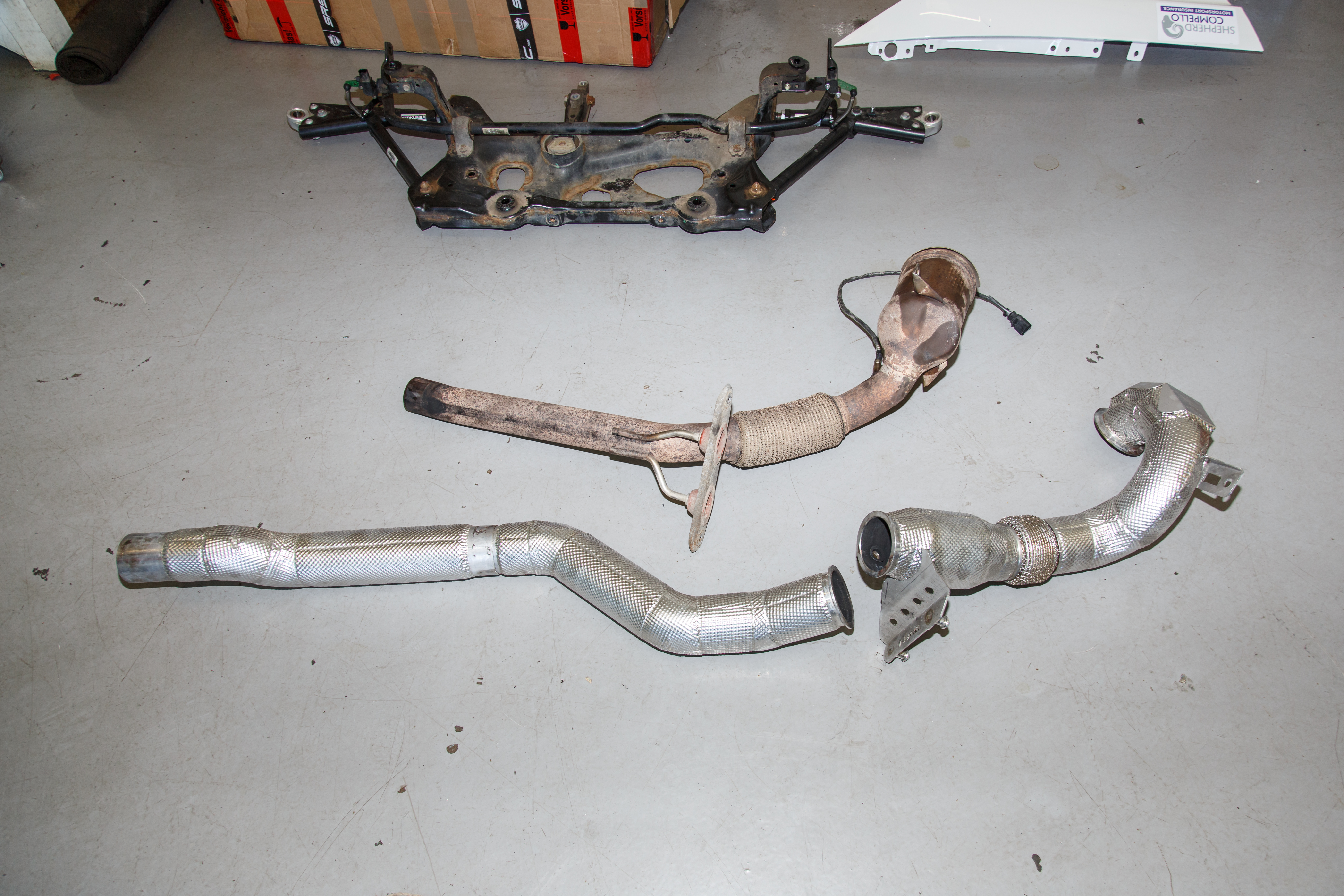 The HPA 3” downpipe is designed around functionality and durability using T304L stainless mandrel tubing. The integrated laser cut heat shield located on top of the downpipe also help to keep temperatures to a minimum too. Plus, this downpipe features a 300-cell high flow catalytic converter, meaning it’s compliant with MOT’s here in the UK. Rob has also had the downpipe coated in Immico heat shielding which will vastly reduce engine bay temps too and help the turbo to run cooler.

In a bid to keep things as cool as possible, HPA also supplied us with their Performance Series direct fit intercooler. This intercooler design offers significantly reduced charge air temperatures which result in exponential performance gains, particularly for modified cars. The tube and fin design offers a 95% greater total volume, which ensures only minimal impact on air flow through to the factory radiator.

This simply bolts directly on to the car, without the need for any trimming or modification which is always a winner! This proved to be great on track as many aftermarket intercoolers we’ve tried previously have had a large increase in coolant temp! As mentioned by HPA previously, before fitting with their different design this wasn’t the case. Water temps remained stable as per with the stock cooler, but intake air temps dropped drastically.

To help ensure the car is running as cool as possible we also installed a Racingline Performance oil cooler system. This is an absolute must for any hard driven Golf running above stock horsepower. Unlike many other kits on the market, this unit keeps the factory oil to water cooler in position – effectively doubling up on cooling. 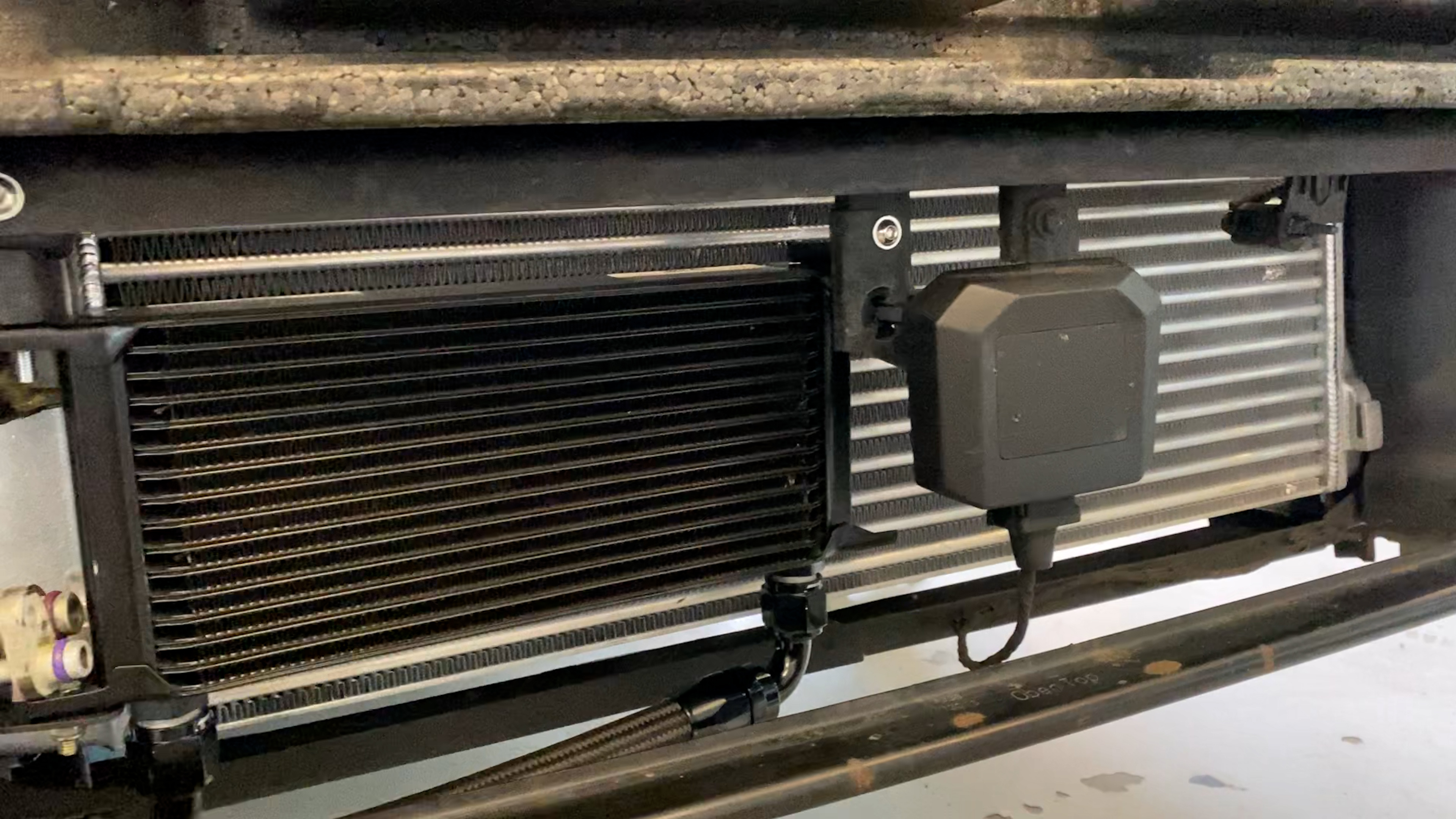 Finally, we installed a set of APR ignition coils which provide a greater energy output, ensuring a stronger and more consistent spark. Plus, they’re red too which mean they must be faster than the stock items!

Back to the dyno

With all the new parts installed and fresh coolant in the car it was time to take the car over to Ti Motorsport for a fresh remap to get the most from the HPA Motorsports turbo. For now this was just a base map as we only got the car to the dyno the day before the trackday and time was tight.  After some fettling with the map, this Golf GTI now produces a healthy 345.7 horsepower and 335.8 lbs. ft torque with plenty of scope for even more power in the future. 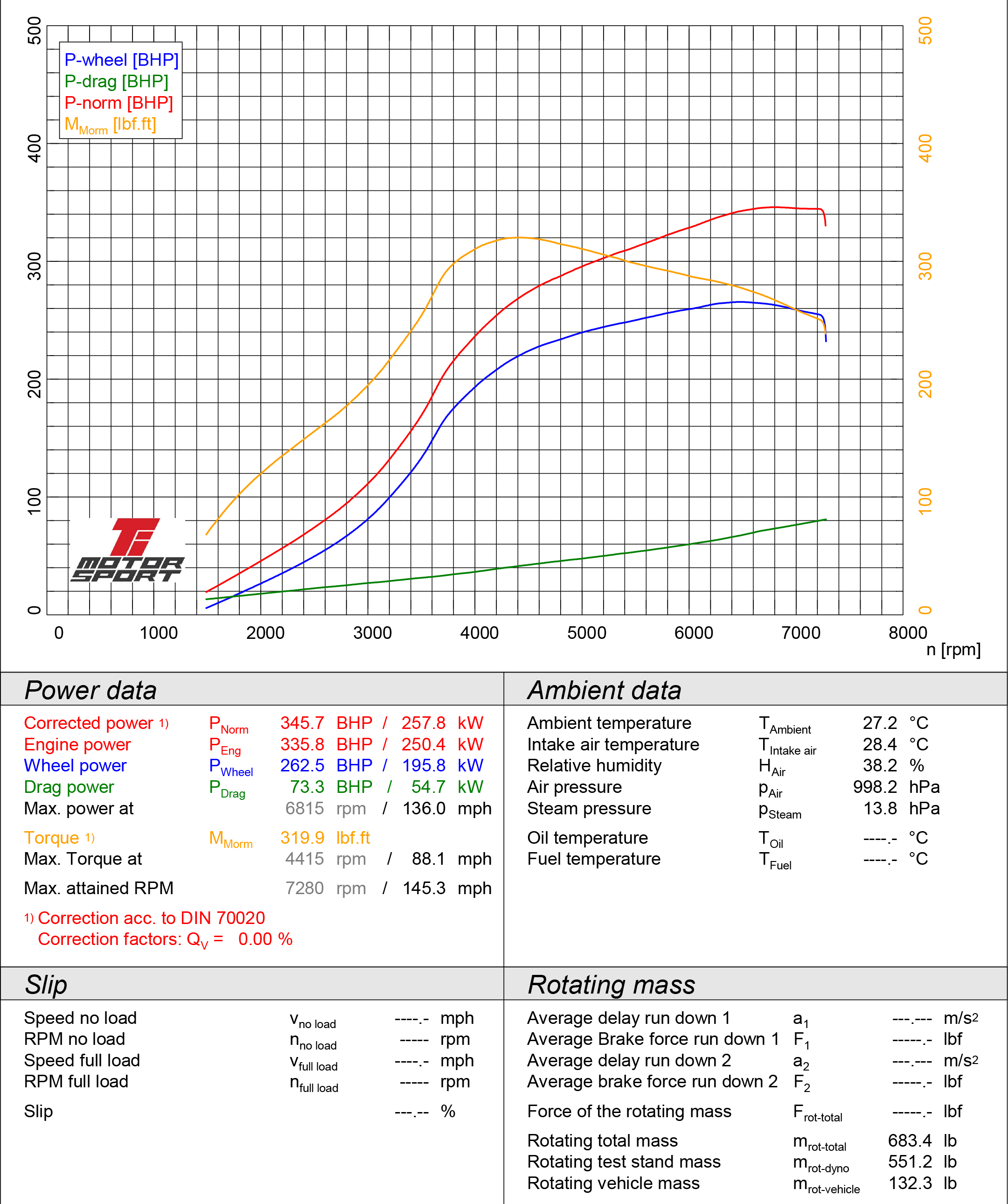 Of course, there’s no point having a range of go faster parts on the car if you’re not going to use them for their intended purpose. So, we headed back to Donington Park so Rob could put the Golf through its paces again. 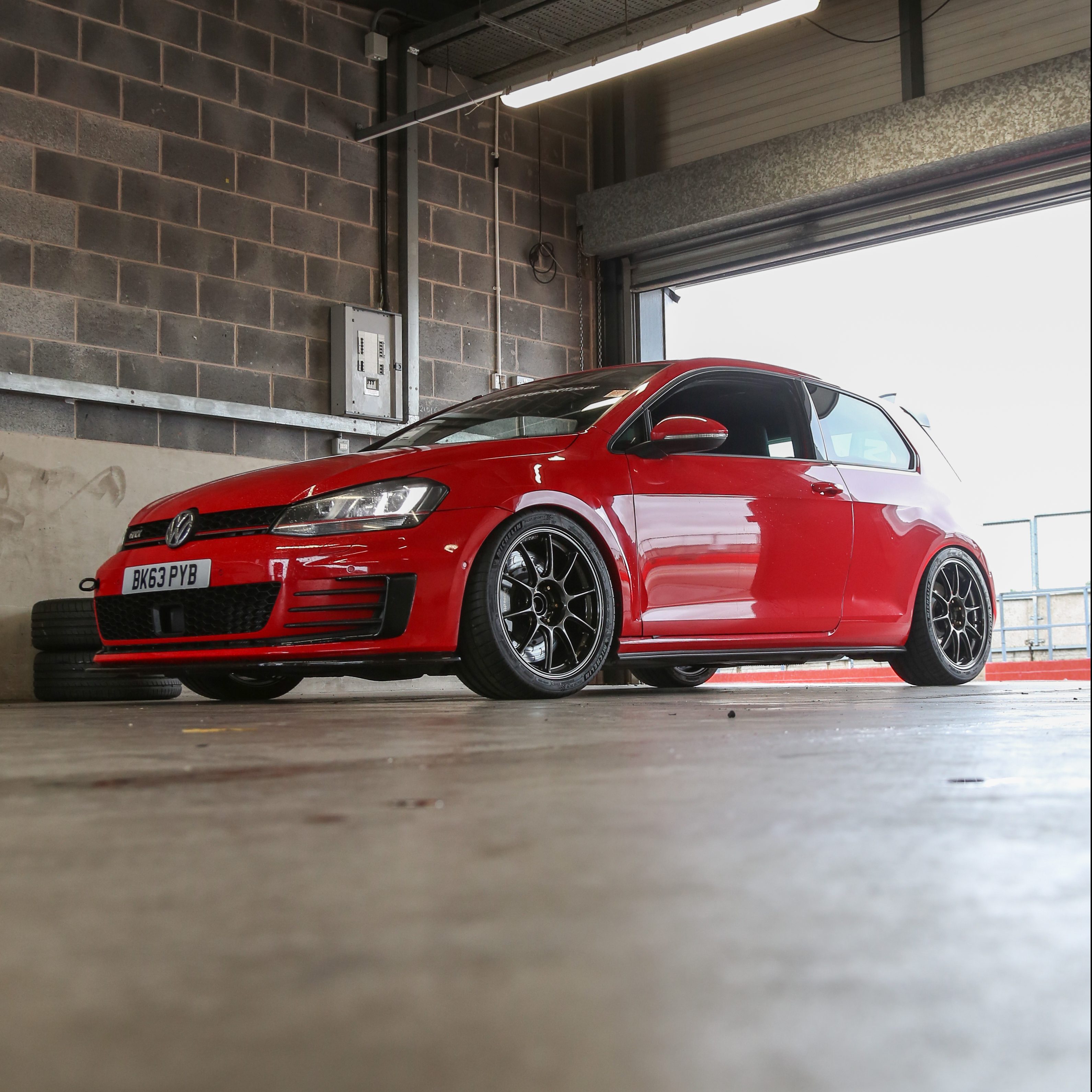 The eagled eye readers amongst us might notice a couple of changes since our last visit here. Rob has now switched the YSR big brake kit for an AP Racing system. This isn’t necessarily an upgrade over the previous BBK, but a set simply came up from a customer who wanted a quieter experience on the road, so we decided to back-to-back test them against the YSR BBK even using the same pads from the YSR kit. Braking wasn’t reduced as expected and there was no difference in feel, showing just how good the YSR Kit is for almost half the price. 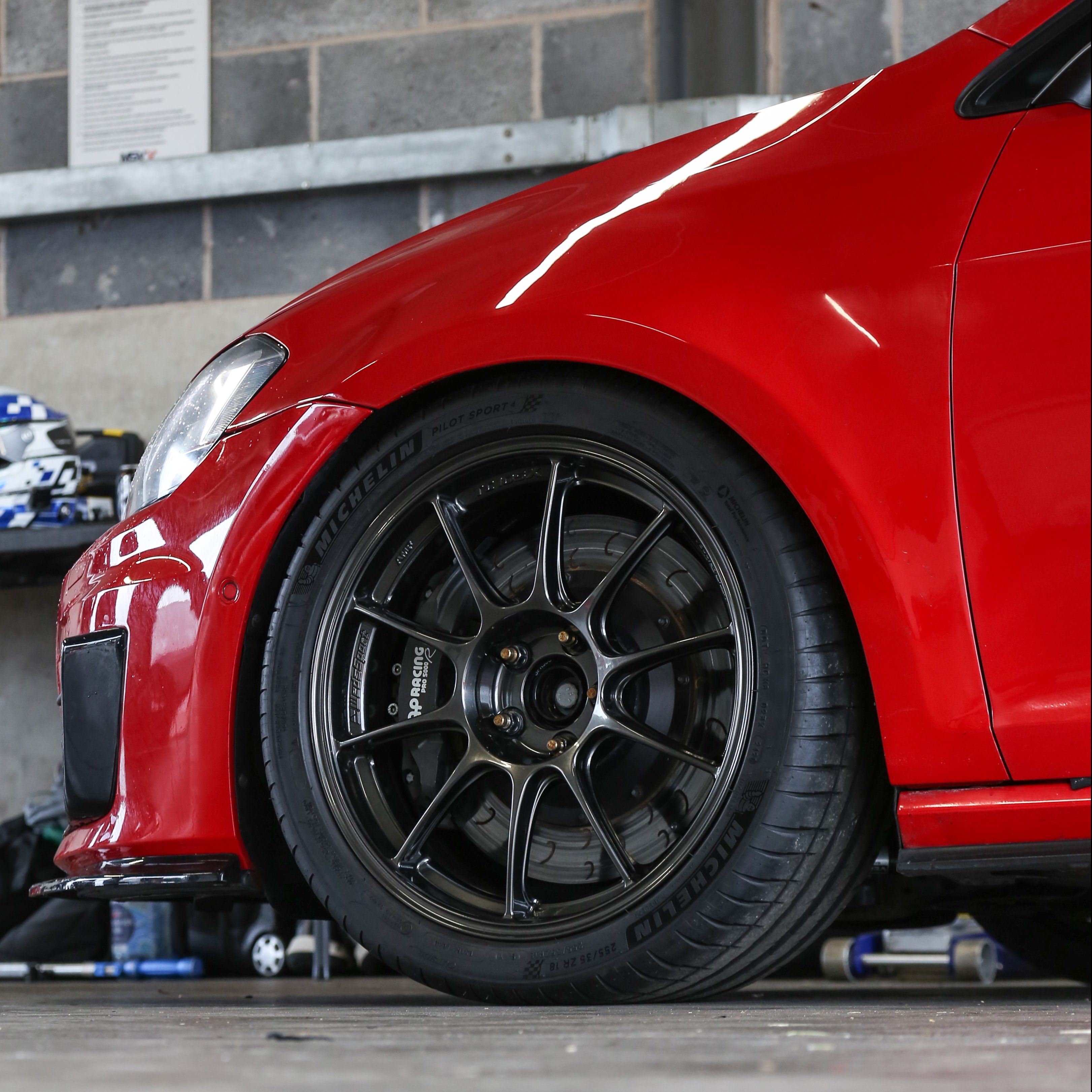 You may notice that the front of the car looks more aggressive now too. This is because wider front wings have been installed which allow for a wider wheel combination and the use of a 15mm spacer too on the 18×8.5 Wedsports and the 255 Michelins. The wider wings now allow the use of a 18×10 upfront and 265 in the dry. 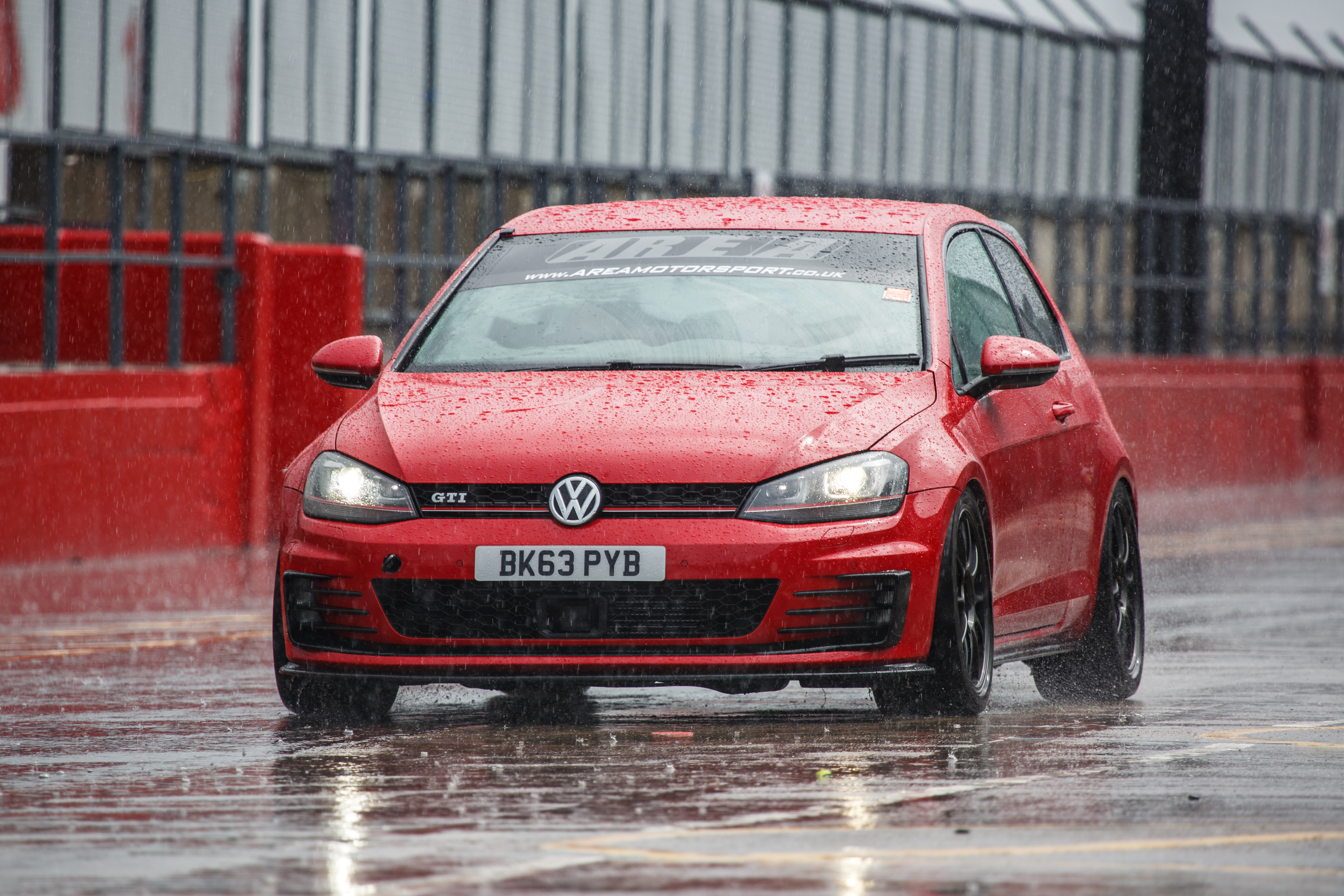 The British summer weather was doing its usual tricks throughout the morning, with sun one moment and torrential downpour the next. However, the clouds cleared during the afternoon which meant that Rob could get to grips with all 345 ponies he now had under his right foot. 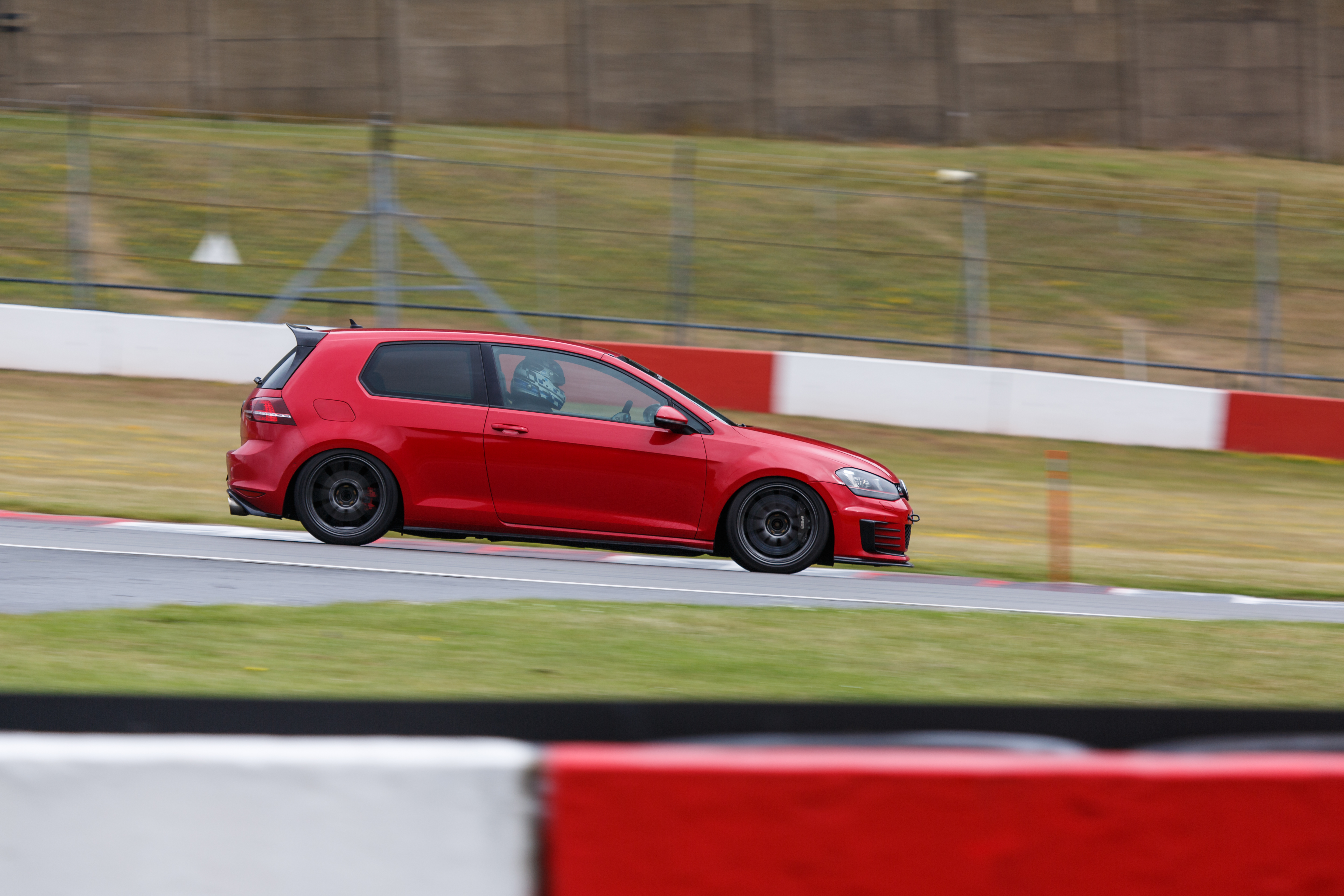 In summary the modifications all performed well and improved feel and lap time further. There was slightly more grip available from the wider tyre in the dry whilst in the wet the car performed amazingly, putting in times relative to current race series Area Motorsport compete in which was unexpected but great to see. 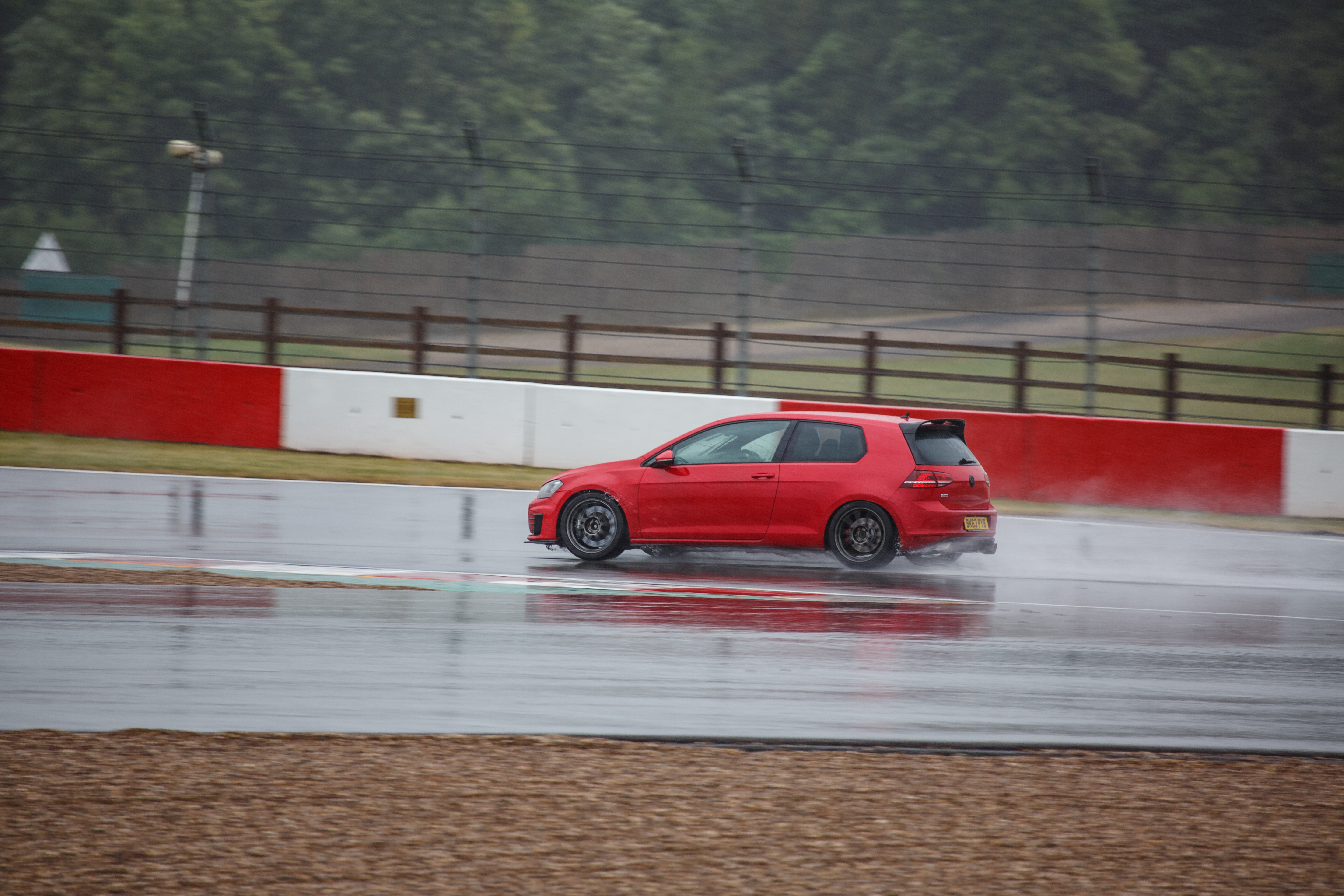 In the dry again we had more pace, the car was now sat at the same power to weight as the golf race cars being 350 HP. Even though this car is much heavier it still achieved an identical straight-line speed on the data overlay. The car gained nearly 3 seconds over the previous day at Donington, mainly from the performance the HPA Motorsports parts have provided. Knocking on the door of 16s in a car that still has a spare wheel, and all of the OEM interior is quite impressive. We’re looking forward to the next day out where the car will be turned up some more to see what it can do!

The build is well underway!