It’s been a while since we last updated this thread, and since that time our Honda NSX has had a multitude of upgrades with something major in the works too. 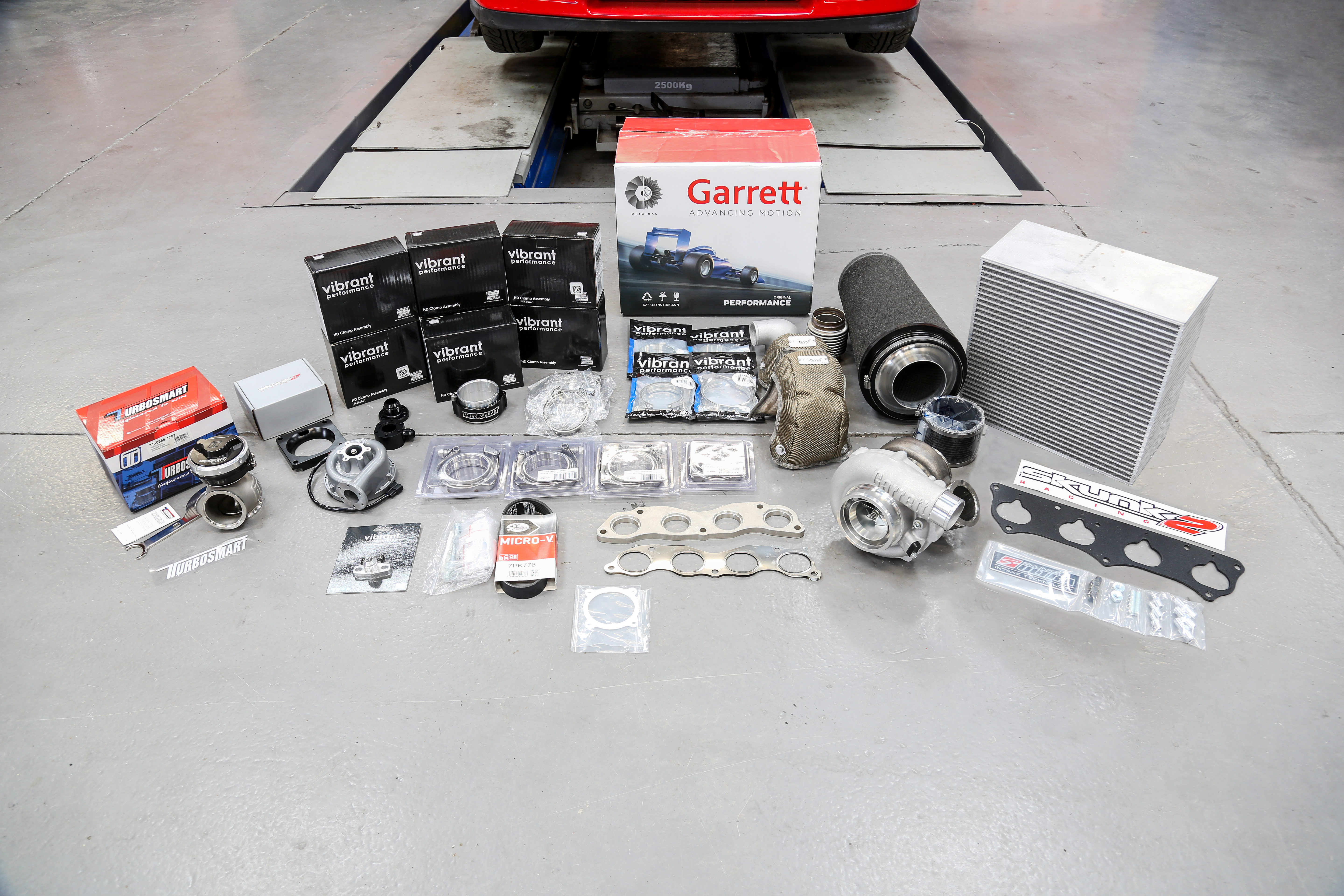 That’s right, we’re ditching the supercharger and installing a Garrett 58mm G30-770. Although this particular turbocharger is rated to a maximum of 770 horsepower we’ll be looking to run it around the 600hp mark to preserve our drivetrain components. This is until we take delivery of a Holinger MF-2WD 6 speed sequential gearbox in October, which is capable of handling 700nm of torque. Then we can really start getting the most of out of the Garrett!

Helping to keep our turbo temperatures to a minimum will be a Funk Motorsport titanium heat blanket. This will prevent heat soak in the engine bay and make the surroundings more reliable whilst accelerating hot gases away from the engine.

To further aid cooling, we’ll be utilising another Davies Craig electric water pump that will be hardwired into the electrical system. This is in addition to the Davies Craig water pump that we already have at the front of the car. The 2 pumps will be controlled by the Life Racing ECU to work in perfect harmony together. This is a great alternative to a traditional belt-driven pump as they run directly off the motor meaning a loss in horsepower. A CSF Race air-over-water intercooler core will be fabricated into a charge cooler later down the line too. This is rated to 2000 horsepower so will work wonders keeping the car cool. The enormous air filter was manufactured by ITG Filters, which was originally designed for a 1,200 horsepower truck!

Keeping boost under control will be a Turbosmart GenV WG60 external wastegate. This particular wastegate features a superior flow path as well as a high temperate resistance making it a market leader within its sector. We will be controlling the wastegate with compressed air so that we have ultimate control.

Finally, we’ll be using Vibrant Performance HD Clamps to ensure the stability of the plumbing. These feature a billet aluminium quick release clamp, a pair of welded ferrules, a hard anodised union sleeve as well as their signature quick release locking pins.

We’d like to give a huge thanks to Garrett, Turbosmart and ITG for supplying us with these parts for Tsuki! We can’t wait for the build to get underway and get the most out of these parts.

The interior has seen plenty of changes now too, with a GT3 style carbon steering wheel, that was fabricated by our in-house whittler, Andrew Ford. Complete with an array of buttons that have custom controls, this is a completely one-off part that isn’t available anywhere else. You may also notice the custom dials too, this is so that our driver, Luke Sedzikowski can utilise switchable maps and traction control settings to suit the conditions of the track. For example, when it’s raining the map can be turned down for less power and the traction control turned up to reduce the changes of spinning out.

Another addition to the cockpit of the NSX is the Garmin Catalyst. This is mounted onto the top of our custom carbon fibre centre console is an amazing piece of technology that helps to maximise the most out of the car. The Garmin Catalyst is an industry-first racing coach and driving performance optimiser that’s changing the world of motorsports. It gathers your performance data and provide real-time audible coaching. Immediate session analysis helps drivers of all levels achieve their full track driving potential. 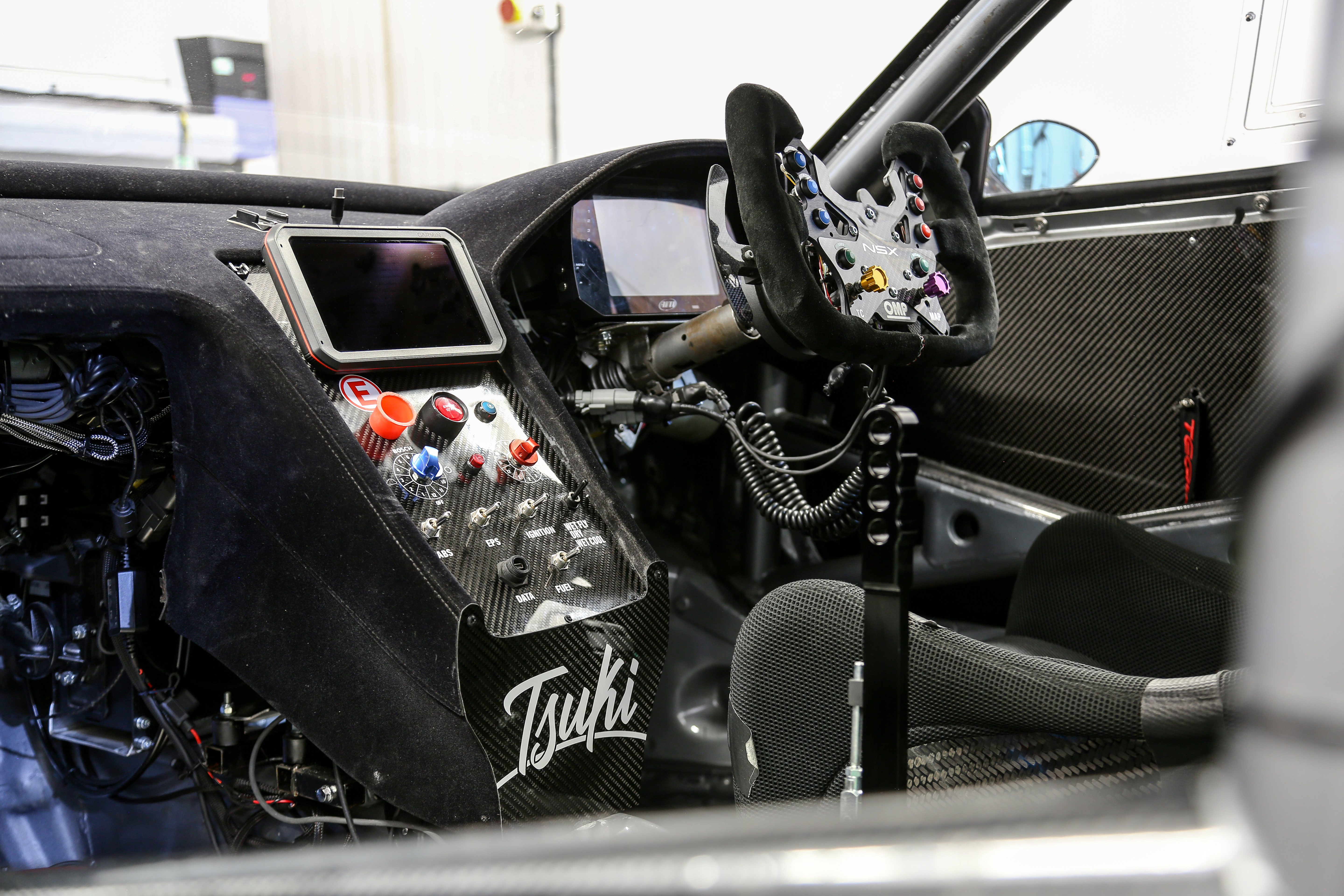 The custom work doesn’t stop there though as we enlisted the help of ICEFAB once again and tasked him with making the car a charge cooler reservoir. This little tank solved our issue of rising air intake temperatures, which means we can push even harder for longer. 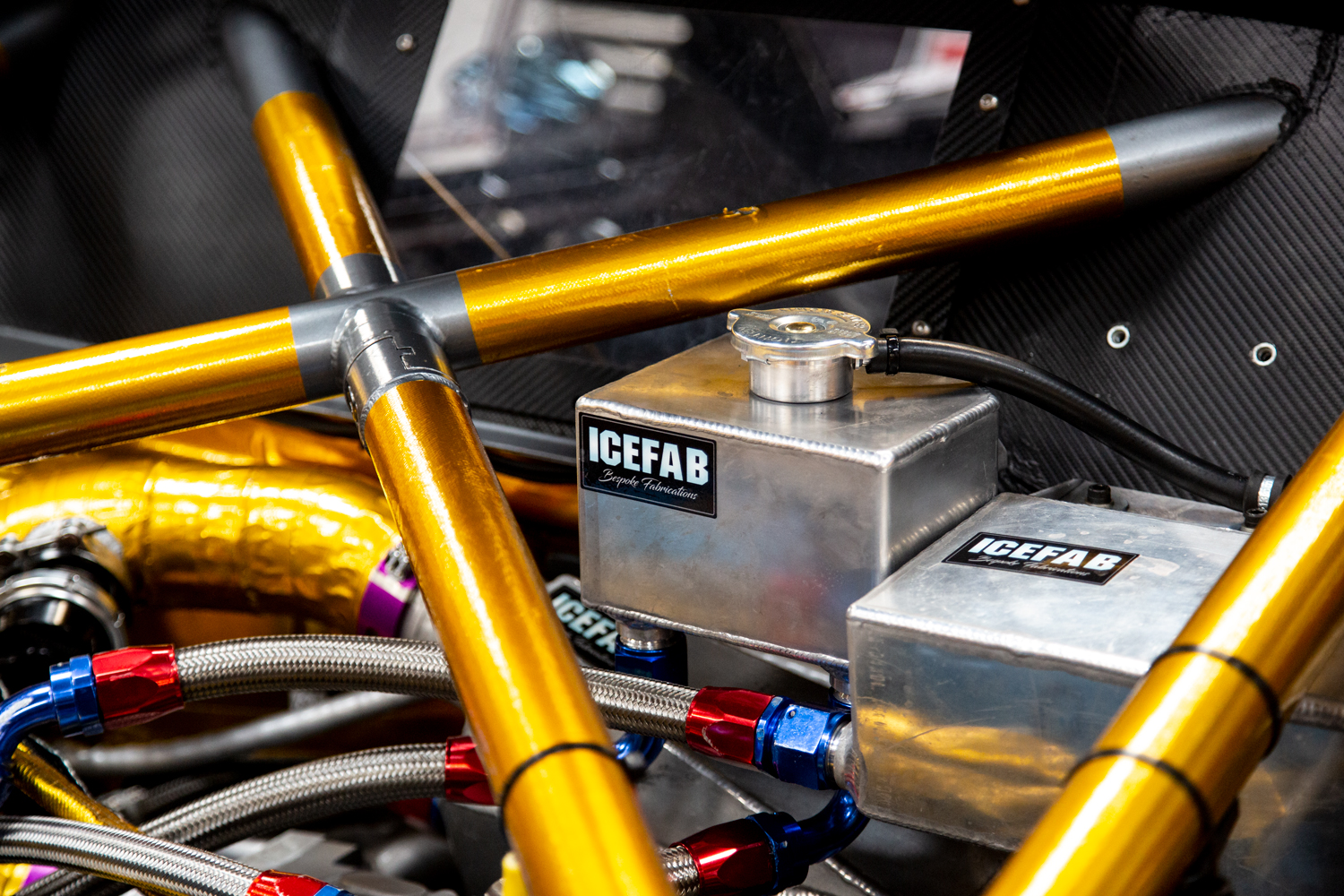 To allow even more air to pass through the car, ICEFAB also fabricated us a bespoke radiator duct that sits neatly behind the front bumper. This literally scoops up cold air and sends it straight through the radiator. 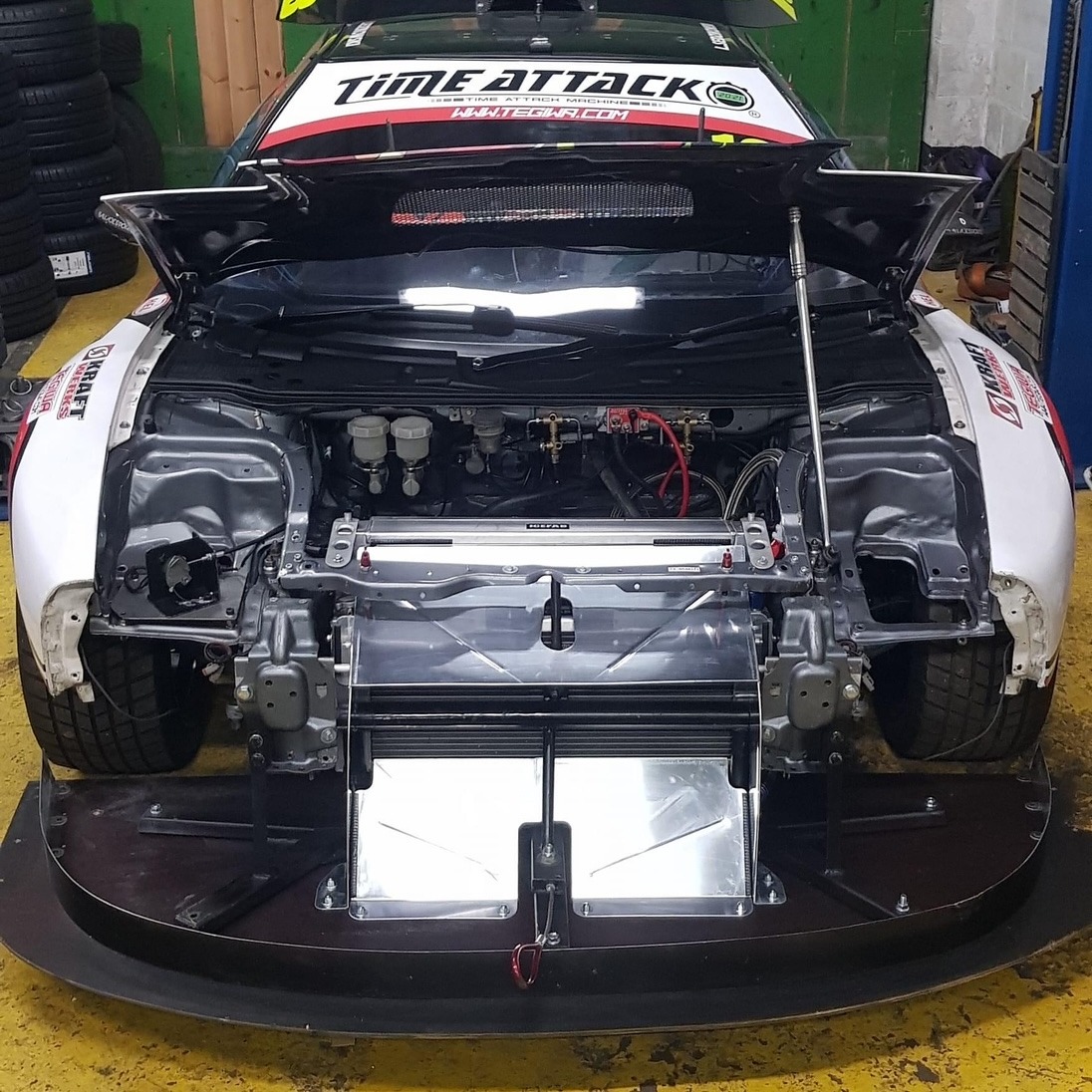 Finally, ICEFAB crafted up this unique panel filter housing that sits just behind the intake scoop. Previously, a small cone filter fixed directly to the supercharger inlet housing meant that the car was breathing mostly hot air between the engine and gearbox. With this solution, an off the shelf ITG filter can be utilised to allow for the coldest air to be sucked into the filter. This was of course before we went down the turbocharging route, but still an awesome piece of fabrication that helped our supercharging woes! 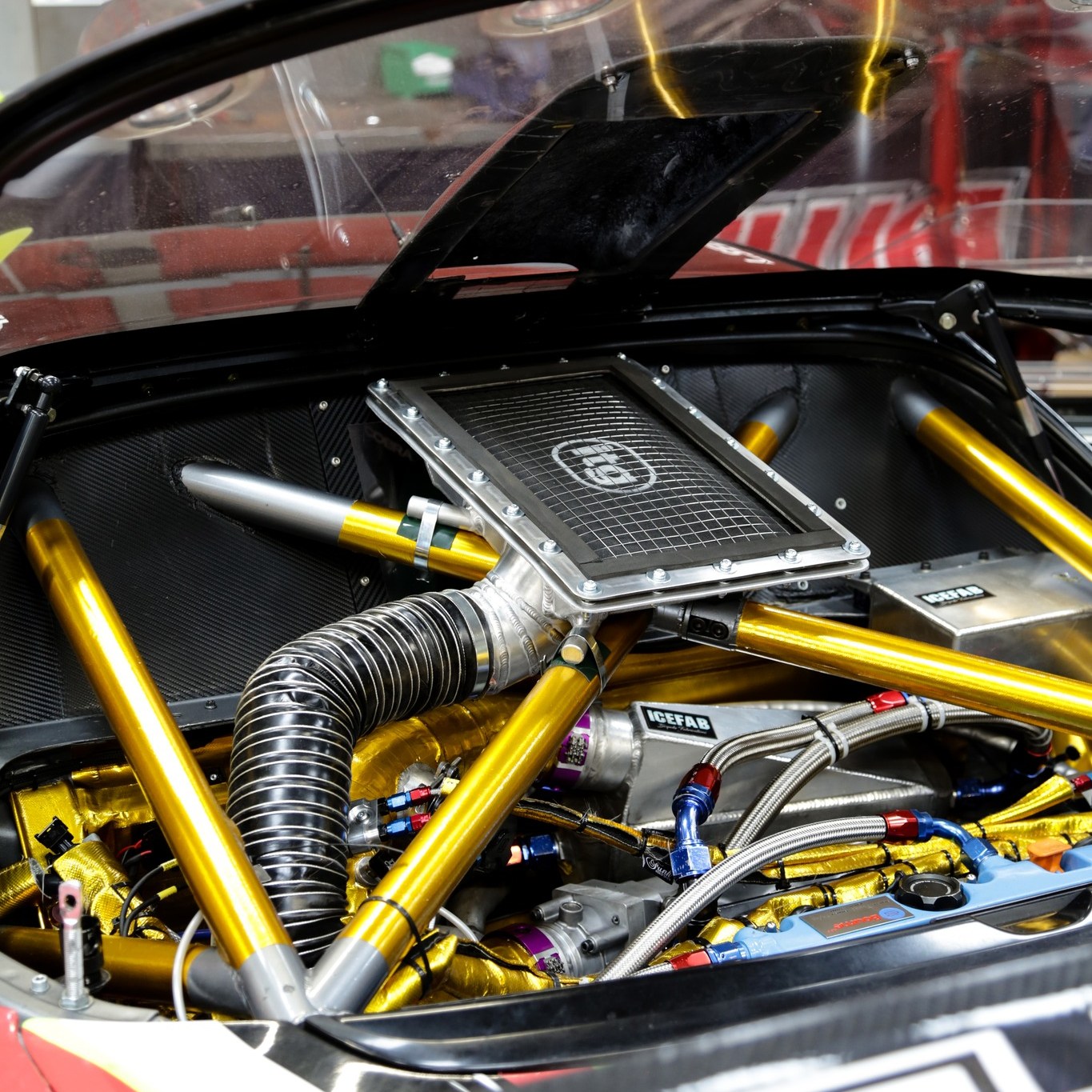 Whilst we’re on the subject of keeping temperatures in check, we once again enlisted the help of Funk Motorsport. Utilising their specialist heat management products underneath the car with heat blankets, shielding and exhaust wrap, this helps to keep temperatures to a minimum by not letting the hot air travel up towards the engine bay.

Whilst we work on getting the turbo fitted to the BourneHPP K22, Tsuki will be out of action for the next couple of rounds of Time Attack. All being well, Tsuki will be making her turbocharged debut at Brands Hatch in September for Go Japan! Make sure you stay tuned for updates until then.