This weekend saw us climb over the halfway point of the 2021 Time Attack Championship as we headed to the most picturesque circuit in the United Kingdom, Anglesey. This is the first visit to the spectacular North Wales venue since 2012 and many drivers including our very own Mikey Birch relished the opportunity to drive the iconic coastal circuit. 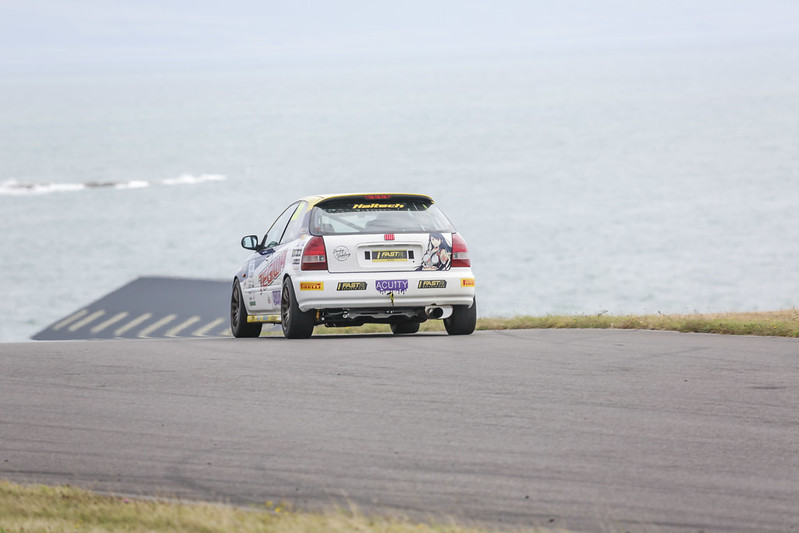 Having not driven the track before and unfamiliar with the track layout, it was a steep learning curve for Mikey. The clifftop location and undulating apex’s make it a challenge for even the most experienced drivers on the grid. Plus, take into account that Anglesey’s offshore weather seems to do whatever it feels like at any given moment! 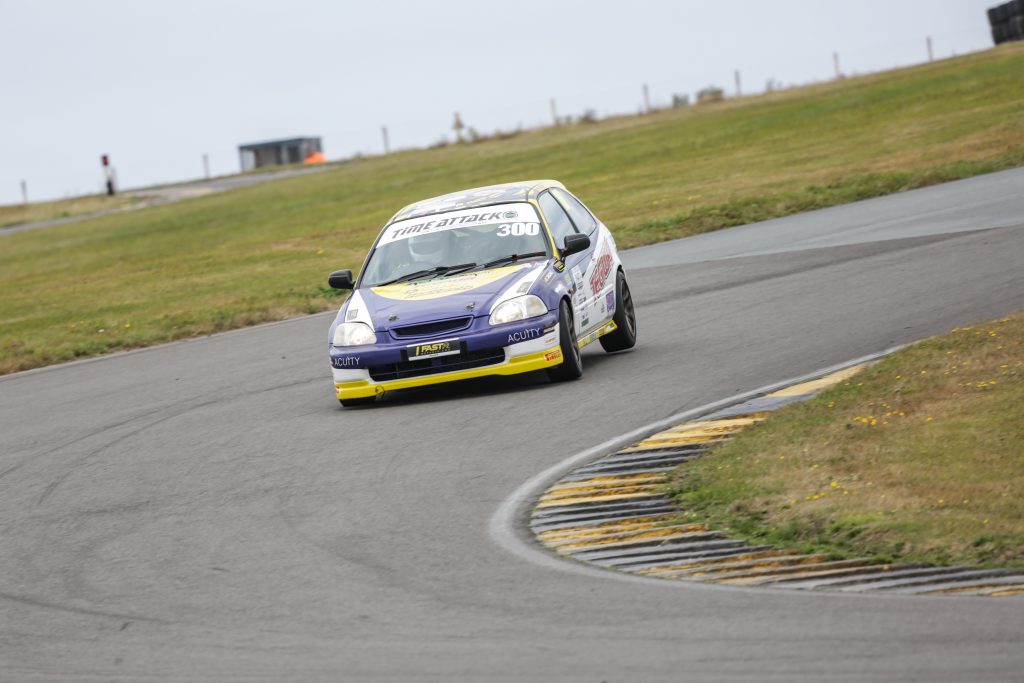 Before we look at how Mikey got on, it’s worth noting the tribulations that his K20 powered Civic EK has gone through in the week leading up to this meeting. A Tegiwa track day previously in the week saw the Civic head to Donington Park for some action with the Tegiwa Team. However, Mike’s bonnet decided that it didn’t want to remain closed anymore as he headed down the Dunlop Straight at circa 90+ mph. With the most limited of visibility, Mike managed to limp the car back to the garage with a broken windscreen, bent bonnet and cracked roof. Kudos to Mike though as he spent the next few days sourcing a brand-new heated windscreen and smashing the bonnet back into place whilst he attempts to source a carbon item. 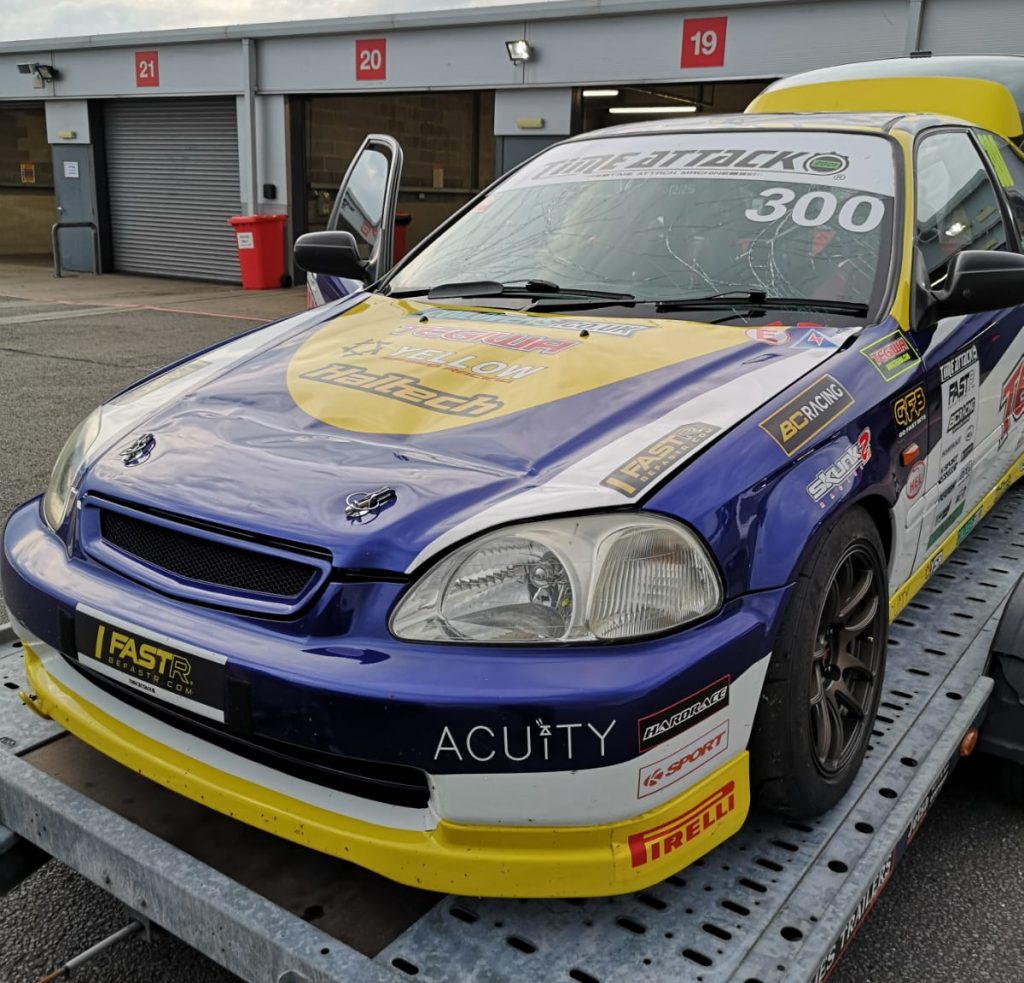 Anyway, with the car now fit to go racing, Mike set about putting in some fast laps! Mike used the warmup session to learn the layout of the coastal track, steadily increasing in pace as the laps went by. His best time of the session was a 1:20.574 which was enough to secure second place. 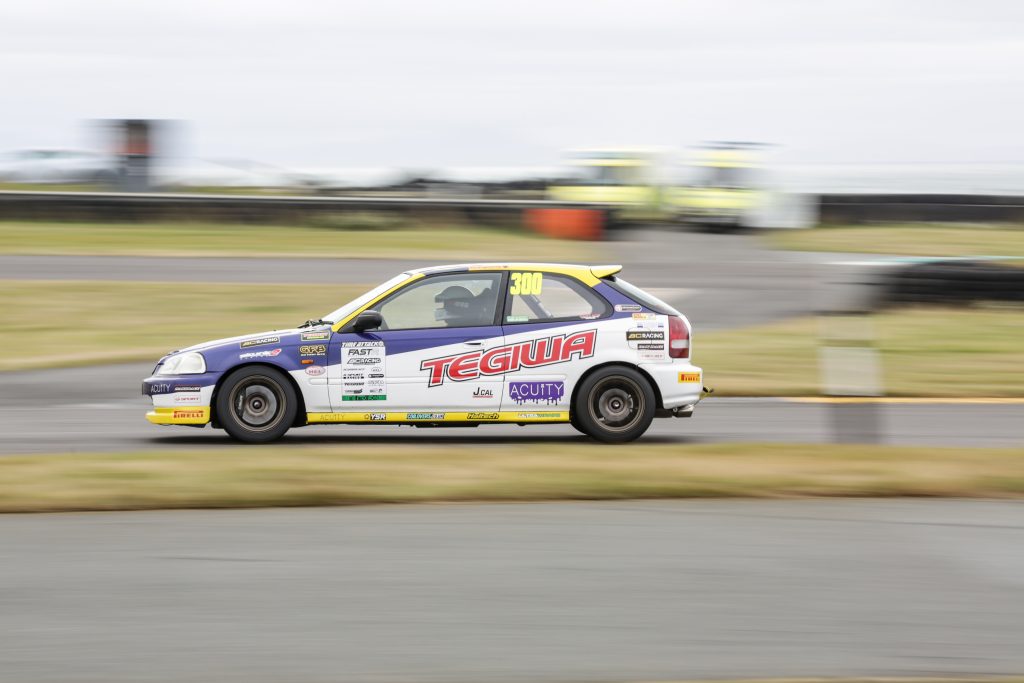 Heading into the practice session it was clear to see Mike upping the ante and pushing his EK towards the limit. Knocking over a second off his initial best lap, Mike put in a 1:19.367 to snatch another second-place finish. After studying the timing boards, it was evident that it’d take something special to catch Andrew Kime in his Citroen Saxo. After some serious pedalling he’d put in a 1:17.085, nearly 3 seconds faster than Mike.

The weather was gradually getting better throughout the course of the day with the sun slowly starting to make an appearance. A dry track in qualifying and points up for grab was a sure-fire way of seeing the lap times take a tumble. Unfortunately, Mike ended up going 2 tenths of a second slower than the previous session.

I over drove the car in this session after trying to search for faster lines. I’m looking to get my lap in early in the final and then push on once I’ve set a decent time!

With the sun now beaming down and the clouds making way, the final was upon us. Mike stuck to his game plan and his experimenting in the latter part of the session saw him set his fastest time on the 9th lap. Breaking into the 1.18’s Mike secured 2nd place ahead of Paul Waddington in the Fusion 2 and behind Andrew Kime.

We’ll be returning to the track at Donington Park on bank holiday Monday for round 6 of Time Attack. We’re looking forward to cheering on Mike again and fingers crossed he can go one better than Anglesey!